Tour of Tameside – We did it! 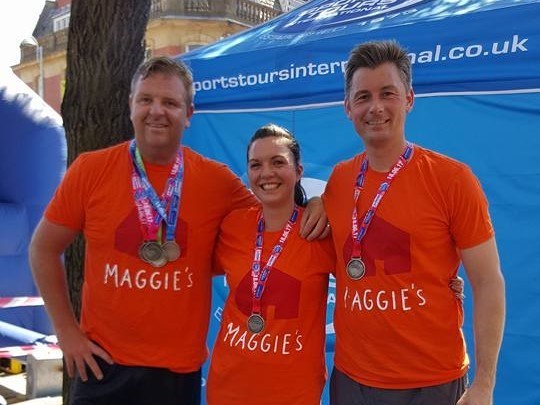 Between the 15th June and the 18th June 2017, James O’Donnell, Anthony Jones and Suzzanne Gardener embarked on the Tour of Tameside, a 4-day endurance running event at various venues around Tameside. The Tour is described by Sports Tours International as ‘the Ultimate Running Challenge’ and was no mean feat for the team.

The first run on the Thursday evening was an X-Trail 10k around Park Bridge and Daisy Nook. This was an off-road run which took runners through scenic areas. The route contained several inclines before several sets of steps just after the 9km mark to really test our stamina and which set the scene for the coming days ahead. There was a great atmosphere throughout the run and many local residents came out in support, despite a small downpour.

The second run took place the following day on the Friday evening, named very appropriately as ‘Hell on the Fell’. This was a 6-mile race which started at Walkerwood Reservoir before leading onto Brushes Road and then up towards Copley Fell. The assent up the Fell was steep and challenging for even the best of runners, but the team kept going, before making a steep decent down towards Copley Leisure Centre.

After a mere 12 hours to recuperate, the third run took place on Saturday morning at 10am. The weather was glorious with temperatures reaching 25 degrees, which while great for a BBQ, was not ideal for long distance running. The race started at Rough Field in Padfield (Glossop) before heading onto the Longendale Trail. The route was mainly flat, with a slight incline in the first mile through the village. The runners then headed back down the Longendale trail to the finish line, not before a sneaky steep incline at the end. Again, there was a great atmosphere, but running such a distance in the heat was a challenge for even the most elite of runners.

The final run took place on Sunday morning being a 7-mile run around Hyde and the surrounding area. The race started at Hyde Town Hall before passing through Hattersley and onto Mottram Road. The route then passed by Hyde Football Club and Hyde Leisure Pool before heading back to the Town Hall where there was a mass of support from family, friends and local residents. Throughout the route there was much support from local residents who came out to cheer on the runners and to encourage them to ‘keep going’ on the hills. It took everything the team had to keep going on this final day as temperatures again rose in excess of 25 degrees.

The event was not only physically challenging, but was mentally challenging also. The recovery time between each race was short, with less than twelve hours between ‘Hell of the Fell’ and the Hero Half Marathon. Aside from any muscle pain and physical exhaustion, each runner had to have the determination to keep going and to get through each run even in soaring temperatures.

There was great support from the marshals and stewards throughout the 4 days, ensuring the safety of all the runners; stopping traffic, assisting with first aid and providing water and jelly babies.

All for Maggie’s Oldham

The team have put themselves through the grueling 4-day event to raise money for Maggie’s Oldham, a charity who offer care and support to those affected by Cancer. Maggie’s Oldham opened its doors on the 9th June 2017 and are already welcoming many people affected by Cancer from the local community to benefit from their services. O’Donnell Solicitors are grateful for all the sponsorship and support they have received so far in raising money for this amazing charity and if you are able to give, then any donations will be gratefully received. Please visit our Just Giving page at https://www.justgiving.com/fundraising/odonnelltouroftameside.

‘This has to be the biggest physical and mental challenge I have ever endured in a sport but I would not have suggested something easy. I had every confidence in my colleagues Anthony and Suzzanne and they proved me right. It was absolutely brutal, especially the Half Marathon where the heat drained all runners. Indeed, a number suffered from heat exhaustion which scuppered them for the final stage in Hyde on Sunday. I am extremely proud of what the three of us have achieved both personally and in raising awareness and funding for such a worthy cause. It was an emotional finish on Sunday and this type of endurance event says a lot about the individual and their determination and mental strength. I am over the moon with the level of sponsorship which I think reflects the dedication and effort put in by all three of us. The firm is delighted to have been able to help Maggie’s Oldham in this way’.